My aunt Birgitta, now 73, spent her entire professional life as a mapmaker. Her hands, sensitive, exquisite tools in their own right, wielded a bevy of curious instruments, tiny mechanical pens containing delicate swivels that could delineate the filigree of rocky coasts with patient precision. Hunched over vast swaths of paper, she was trusted with the sacred task of reaffirming the limits of the world.

In some ways, it is a heartbreaking duty.

Now, each of her hands does the job of two. Every day, she uses them to reach across a table to spoon feed my Uncle Kenneth, who, due to his advanced Parkinson’s Disease, is unable to perform even the simplest of tasks, or speak his love to her in intelligible words. The coast of the gulf that separates them is the rockiest she has ever seen.

Her bravery is humbling.

Borders can be arbitrary and fluid things, the results of convention and accretion, subject to the shifting personal geologies of custom, belief, loyalty and circumstance. Symbol-dependent creatures that we are, the line, that most humble and protean of marks, encapsulates a linkage of points past which we are unable to move without consequence. When a map takes shape, it becomes as much a contract as a guide. Intentional or not, just or not, and whether we like it or not, its clauses define us. We have little choice as to where and how most distinctions are drawn, and we spend our lives, both as individuals and as a species, failing to transcend them. In truth, we have such little understanding of the domains our maps represent that we get lost all the time, even in our own backyards.

Alfred Korzybski, a scholar who initiated the field of General Semantics, and theorized that humans are limited by what we know through our nervous systems and our languages, made the now-famous assertion that “The Map is Not the Territory,” indicting the continuous mistake of confusing our models of reality with reality itself. For instance, longitude and latitude, those critical components that comprise our ‘system of the world,’ are not intrinsic to the Earth, but manufactured guides that make sense of our passing. We mark time and distance with abstraction to orient ourselves, laying down hopeful breadcrumbs to help us find our ways through the chaos, back into the safe, welcoming arms of our tribes.

While we depend on tribal affinities for safety, they also set limits on our capacities to love, trust and feel empathy. The lines we cross from one social status to another, one neighborhood to another, one culture to another, are rarely literal marks drawn in bold colors onto solid surfaces for our benefit. Often, we have no way of knowing where a line is until we find ourselves on the other side of it, suddenly alone and afraid.

In the Age of Information, negotiating social terrain has become the apotheosis of human navigation, and mistakes have proved dangerous. Unintentional transgressions occur often in these liminal spaces, and the punishments inflicted on trespassers fall far outside the purviews of proportional response. Witness the rise in online bullying and its heartbreaking results. It appears that the private meridians we carry within ourselves, the demarcations of our personal space and internal territories are proving the trickiest to patrol and maintain. Disastrous consequences await the unwary traveler.

Sometimes, we find ourselves cruelly and abruptly deported from our comfort zones, due to factors beyond our control. Small twists of fate have a nasty way of turning into full-blown twisters, and their capricious winds can lay waste to the most deliberately laid foundations. Maps are of little use when your world has turned upside down.

For instance, many Americans have found themselves torn from their moorings in the last decade. A sudden descent into poverty is devastating, but consider those who have lived with it their entire lives. The abyss takes all comers, but those of us who are new to it lack a very basic understanding, and find it difficult to ask for help from those who speak poverty fluently. We, the newest victims of an increasingly violated social contract, point to our rightful places on the map with despair: “There! There is where I am supposed to be! I could have been a contender!”

Within the iconic perimeter of these United States, the map has indeed become the territory, a powerful fiction superimposed upon the land, involving us all in its plot. In a depression, or a recession, we are not citizens, but characters, thrust helpless upon a gigantic stage tasked to conquer adversity with the most American of qualities: our legendary rugged individualism and indomitable gumption.

If our bootstraps should tear from the pulling, and we fail to triumph, may we no longer call ourselves “Real Americans?” Relegated to the shadows behind the scenery, are we then made to do nothing but turn the cranks and pull the chains and run the spotlights to make the stars of the America Show glow bright, front and center?

The relentless competition for that rarefied island of light is throwing us all into darkness. To paupers in an Economy of Attention, the injustice of anonymity and powerlessness endemic to a life lived on the margins of poverty and racial inequality can give rise to a certain type of anger that is partially appeased by schadenfreude: How we love to watch the stars fall from the sky, for we are lit briefly by the flares of their glorious wakes, our dignities rekindled.

What makes us jostle so for supremacy? Why the persistent push for expanded turf by coloring our maps outside the lines? Why not attend to the benefit of our neighbor across the hedge as we would to our own, instead of growing those bushes so thick and high as to blot out their sun? Why must Our Tribe must be better, stronger, faster, richer than Your Tribe? Is our internal sense of self-worth so fragile and anemic that it is unable to sustain itself outside of the aegis of constant comparison?

Reliance on outdated maps, and the rejection of foreign ideas and misunderstood customs, robs us of skills and resilience that can only be learned and developed in the unexplored. Instead, we shred our delicate but essential social contracts and clump for safety with like minds. By driving ourselves into the centers of our herds in order to guard against incursion, we consign our most vulnerable to the edges, using them as shields, hence rendering ourselves utterly insulated, blind, and bloodied by their sacrifice, muffled by the very safety we think it has bought us.

Safety is often not what we think it is, and it is teeming with ghosts.

So much of what we seek when venturing outside of our comfort zones involves the identification of common ground, the dirt that lies beneath all of our feet. From this, we may one day be able to fashion the holy grail: a system of beneficial exchange and unambiguous translation. We all need the same things to thrive. We can subscribe to the idea that “good fences make good neighbors,” but how tall does that hedge really need to be? Can we forge better relationships with those on the other side of it if we grow it just high enough to protect our sense of agency, but not so towering as to be forbidding? There’s a strange irony to the fact that we sometimes get along better with the neighbors whose fence is tall enough that we have to rise up onto our tiptoes to see across it, rather than the folks whose every move we can observe through a short chain-linked fence.

Ultimately, borders are important. Cultivating the patience, humility and understanding to cross a given line without aggression is to acknowledge its validity as a legitimate boundary. The simple act of reaching across a fence to shake hands can create an echo of kindness that reverberates outward and nourishes the community, much as the act of reaching across a table to feed an incapacitated loved one nourishes the soul. This may be the path to one day traversing all borders freely, without being worried for our safety, our identity, or our pride.

A society is a fragile construction, and the paper onto which our maps are so delicately drawn is more fragile still. We must somehow strengthen these contracts with one another, understand our differences better, and rededicate ourselves to protecting the variety that is so vital to a healthy organism. A deeper comprehension of our interstitial space could grow into a mutually-reinforcing benevolence, less a barrier than a bridge. To build it, we must be willing to throw out the familiar but obsolete maps that would hem us in, and with patient, loving hands, redraw new ones in which All Roads Lead to Home. 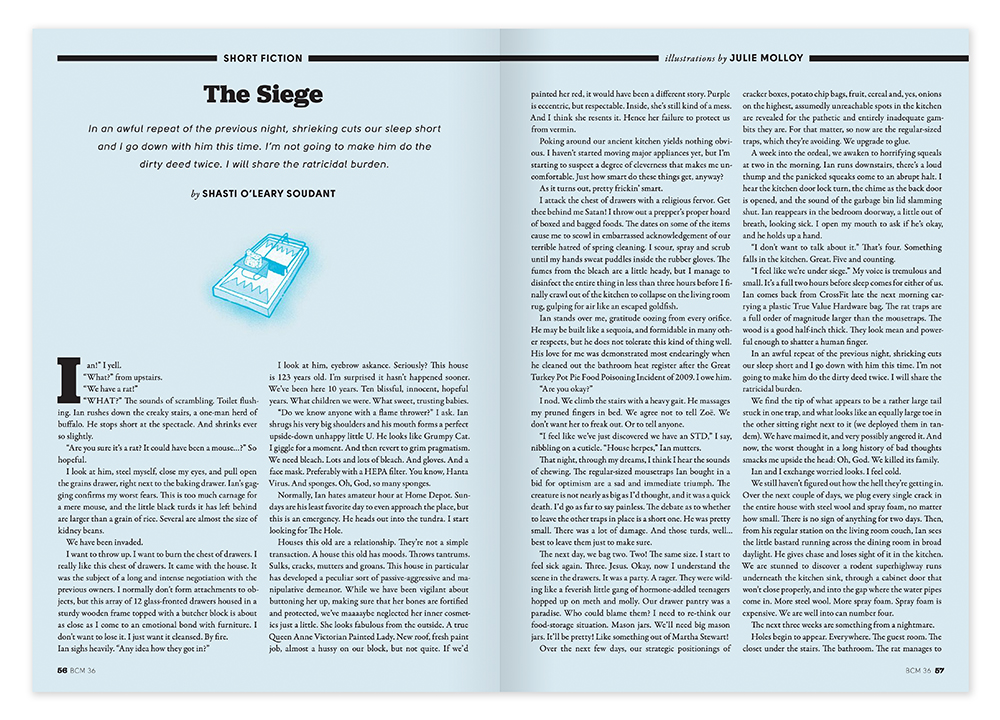 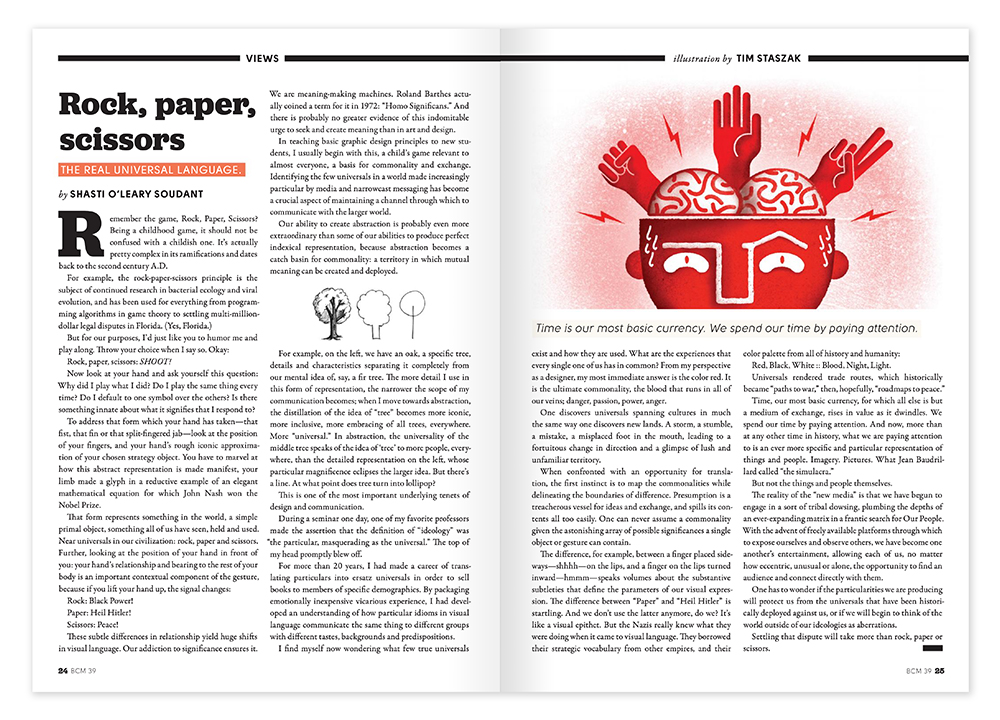 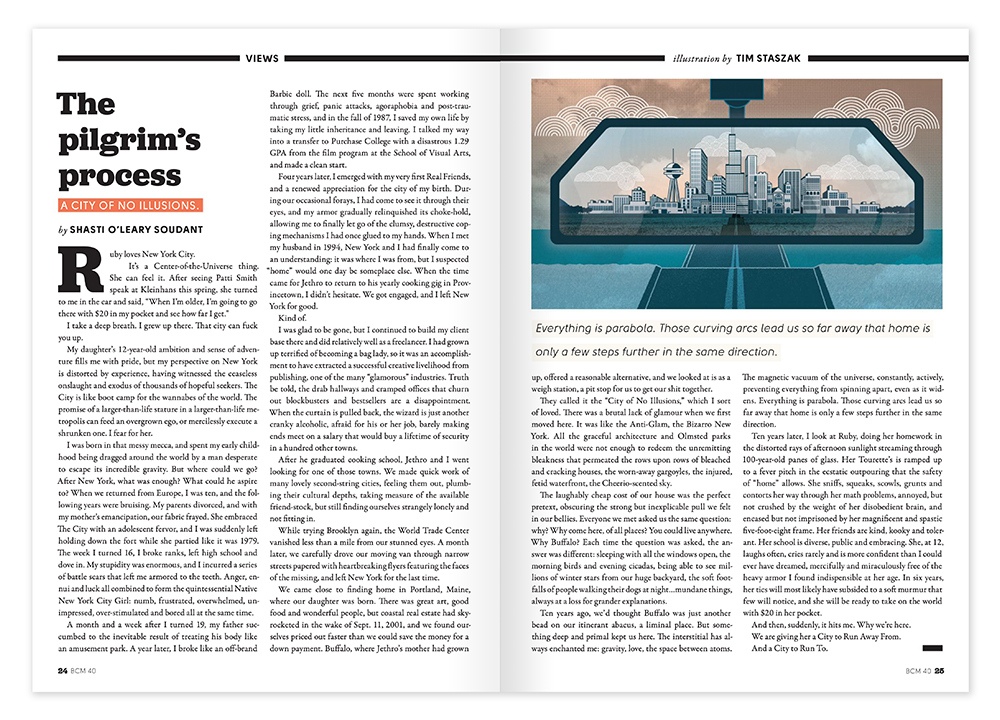